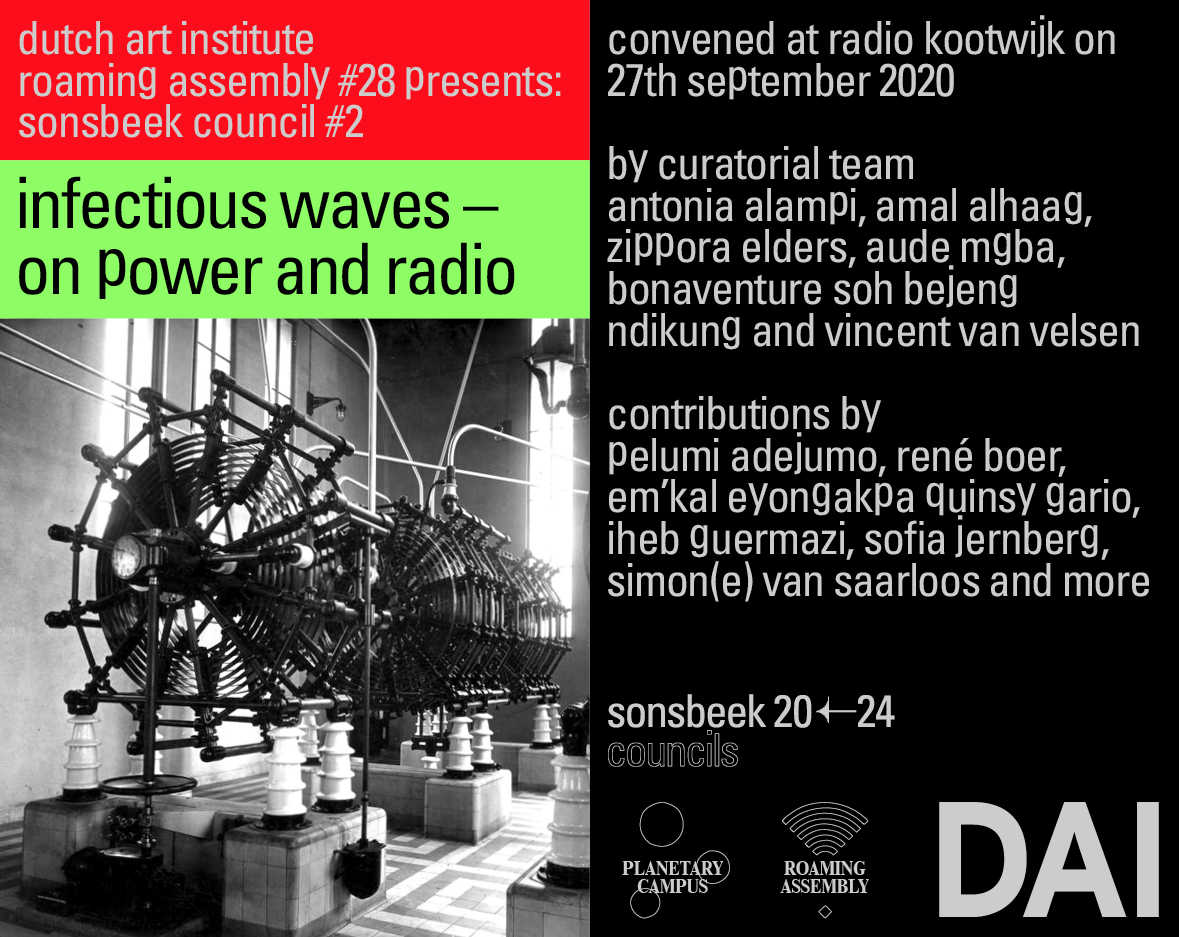 The DAI and sonsbeek 20->24 (the quadrennial that radiates waves outward from Arnhem, The Netherlands, to the rest of the world and back) are joining forces for a speculative journey in several iterations, scheduled between March 8, 2020 and June 24, 2021. After Roaming Assembly# 27 presents Sonsbeek Council #1 Force Times Distance - On Labour and its Sonic Ecologies, which took place in Tunis just one week before the pandemic was officially declared, we are extremely pleased to announce:

“It ⎨radio⎬ is purely an apparatus for distribution, for mere sharing out. So here is a positive suggestion: change this apparatus over from distribution to communication. The radio would be the finest possible communication apparatus in public life, a vast network of pipes. That is to say, it would be if it knew how to receive as well as to transmit, how to let the listener speak as well as hear, how to bring him into a relationship instead of isolating him”[1].

Radio Kootwijk stands in the middle of a park as a cathedral for wireless communication. Neither neutral nor innocent; as all technocratic fantasies (pre)tend to be. The Radio Kootwijk transmission conglomerate was the first to provide a direct radio link between the Netherlands and its colonies in Indonesia (known at the time as the Dutch East Indies) as another transmitter park had been built in the south of Bandung. This project was a means to bridge a distance of approximately 12.000 km between coloniser and colony, to overcome physical borders and multiple national jurisdictions. It was a way for the Dutch colonial government to circumvent international dependencies and create a direct and efficient system of communication - to perform imperial domination, to make more efficient warfare tactics, to strengthen forms of administration and control. The simultaneous increasing insurgency of subversive anti-colonial political movements led the Dutch government to in turn change strategy towards an increasingly repressive regime that suppressed potential acts of resistance. In this context Radio Kootwijk was merely the long imaginative arm of the colonizer to whom the colonized people’s suffering was seen as administrational byproduct, as casualty, as noise. This type of radio transmission represents both the possibility of connecting some voices while at the same time preventing others from connecting, airing or interfering with authority and Dutch nationalist propaganda.

Theodor Adorno once used the metaphor of radioactivity to describe Walter Benjamin´s first experiments with radio. He defined it as such to speak of the power Benjamin had to transform every word that came under his scrutiny, while at the same time referencing the magic, the mystery and the power of the medium itself. “Radioactive, shares with Rundfunk, or radio, a connotation of atmospheric spreading, dispersal, and uncontrolled movement across and within borders and lines of containment; the airwaves, like the air or the atmosphere, represent a quasi-invisible scene or medium of transmission”.

With this program we want to zoom into the  relationship between these electromagnetic waves and power – strong, dangerous, tempting, infectious, and contaminating as power can be.

In front and inside of this monument we begin by understanding where we are while we listen by looking at its architecture and its historical function, and at what meanings these types of structures still convey. We aim to look at the topography of desire that defined the colonial project and the types of relations it made possible or not, and inevitably the role that radio communication and radio broadcasting played in this, ranging from being a means of subjugation to one of resistance. We also reflect on it vis-á-vis the conditions that define relations in the present moment, the ways in which online means of communication are currently shaping relations along the multiple and changing lines of division and distance that national jurisdictions keep producing.

Through talks, lectures, concerts, performance poetry, dance and film we invite you to a speculative journey around radio, Kootwijk, soundwaves, intimate and public emissions, emotions, power in its connection to desire, and beyond.

That said: we are eagerly looking forward to sharing with you a LIVE AUDIO STREAM link (on the day of the event), soon to be followed by an in-depth reflection written by Janine Armin and to be published by OPEN! Platform for Art, Culture & the Public Domain – our 2019-2020 media partner.