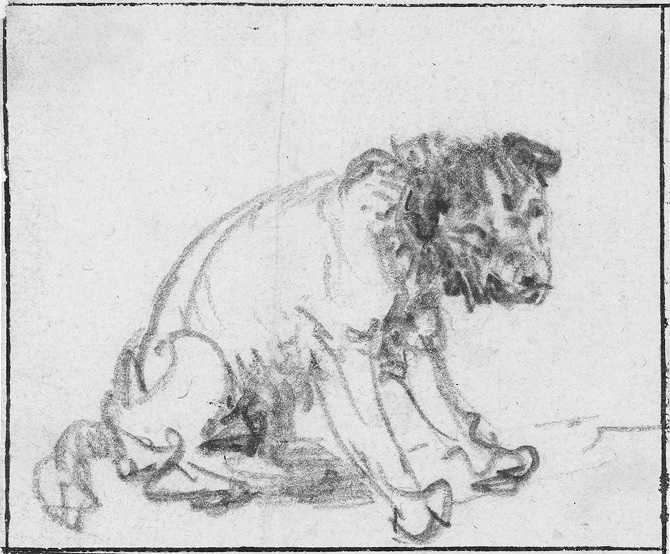 Sean Snyder’s practice frequently revolves around formats, standards and protocols—and their disruption. In February of 2017, while teaching at the art academy in Braunschweig, Sean Snyder came across a newspaper story about a drawing of a dog from the local Herzog Anton Ulrich Museum being reassigned to Rembrandt. With a brand name attached, this sketch now had an entirely different status. Linking art-historical to natural taxonomy (it was a drawing of a dog, after all), and to early Dutch capitalism and colonial expansion and appropriation, Snyder also took his class on excursions to natural history museums.

That same year, student protest erupted at the academy because of the limitation of student access to the studios in the evenings and weekends. Seeing resonances with late-60s protests, Synder and his class began examining the 1966 Situationist-inspired Strasbourg student stunts and provocations, which included the founding of a Society for the Rehabilitation for Karl Marx and Ravachol. Ravachol being a bomb-throwing 19th century anarchist. Before long, an entity calling itself The Rembrandt and Ravachol Appreciation Society began using the Rijksmuseum’s online platform Rijksstudio, which allows “members of the public” to select and crop images of artworks and other objects from the collection, to make image sets and to download these materials and “[use] them in a creative way.”

In 2019, the museum invited such members of the public to submit their own artworks for an exhibition celebrating Rembrandt (Lang Leve Rembrandt). Among the 8,500 submissions was one by The Rembrandt and Ravachol Appreciation Society, titled (Im)mutable: Braunschweig Terrier—a proposal for an installation of vinyl stickers that would be free to take. In the online entry form, the Society noted that “the inventory number (Z 719) of the ‘New Rembrandt in the museum’s classification remained unchanged, revealing both the extent of the mutability of reality and the immutability of the abstract systems that govern it.” In a reenactment of the Richard Mutt affair, the museum rejected the Society’s muttley submission.

The Rembrandt and Ravachol Appreciation Society investigates lost images and the loss of radical ideas. Blending free association with systematic rigour, the Society uses standards and grids not to equalize and make commensurable, but to tease out resonances between the dissimilar. The Society links “lost and found objects” such as Rembrandt drawings, or the shells that were listed in the inventory of Rembrandt’s possessions, to “the shell game of global megacorporations.” If such corporations are the true artists and designers of the 21st century, branding and forming our world, then what would it mean to genuinely celebrate Rembrandt, or art?

On the Rijksstudio platform, The Collected Works of the Rembrandt and Ravachol Appreciation Society continues to function as a site for the extraction of materials which the exhibition at Rongwrong reformats in various forms. Meanwhile, the 27th of February 2020 sees the deadline for yet another competition by the Rijksmuseum: the Rijksstudio award, which “invites everyone to create their own masterpiece inspired by the Rijksmuseum's collection. An international jury of experts will assess who the 10 finalists and the 3 winners of the Rijksstudio Award 2020 are.” The Rembrandt and Ravachol Appreciation Society can neither confirm nor deny that this has any bearing on the opening of its exhibition at Rongwrong two days later.

Sven Lütticken (b. 1971, Germany)
The art historian and critic Sven Lütticken teaches at the Vrije Universiteit Amsterdam and contributes regularly to magazines and journals such as New Left Review, e-flux journal, Grey Room, and Texte zur Kunst. He is the author of Cultural Revolution: Aesthetic Practice after Autonomy (2017), and co-editor (with Eric de Bruyn) of the forthcoming volume Futurity Report. In 2019 he curated the project Propositions #9:Deserting from the Culture Wars at BAK, basis voor actuele kunst in Utrecht.

The Rembrandt and Ravachol Appreciation Society is part of Season 1 of the Ephemeral Evidence* program at rongwrong.

*Ephemeral Evidence is both a program of exhibitions and an attitude and methodology of work and research. This plan is a continuation of rongwrong's research into the blurring of the boundaries between individual and collective works, between exhibitions, performances and educational moments. The title Ephemeral Evidence is derived from the widespread text "Ephemera as Evidence: Introductory notes to Queer Acts" (1996) by Cuban-American performance writer Jose Esteban Munoz (1967 - 2013).