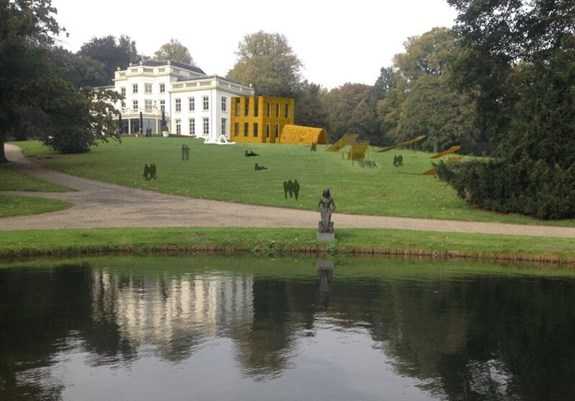 A City and its Exhibition

It was in 1948 that a councillor, a VVV tourism official and the mayor of Arnhem launched an initiative for a contemporary art exhibition on a scale unprecedented in Europe. Their aim was to give the city which had experienced so much destruction during the Second World War a totally new appeal.

Sonsbeek ’49 opened that following year with over two hundred works displayed along the paths in the park. Most of these were figurative sculptures created since the turn of the century. A recurring theme among the newer works was the processing of Holland’s traumatic wartime experience, such as Nel Klaassen’s monumental Honour the Woman which still stands in Arnhem.

Connected to the present

In subsequent editions of the exhibition, the idea was the same. Sculptures by internationally renowned artists were presented to Arnhem’s public: Auguste Rodin, Ossip Zadkine, Henri Moore, Pablo Picasso, John Rädecker and Hildo Krop. After each edition the Arnhem council selected some of the exhibited works for permanent display in the city. Often, these were works that referred to the war, such as Ossip Zadkine’s Phoenix which found a permanent place in front of the town hall. Since the beginning, SONSBEEK has always been closely concerned with contemporary issues and current affairs.

Selected by a curator based on a specific theme

After the first four editions, one every three years and each similarly presented, SONSBEEK seemed to have become a tradition. Until in 1971 SONSBEEK broke with that tradition and quite literally went off the beaten track with a show compiled for the first time by a curator and expressing a specific theme. Sonsbeek Buiten de Perken was assembled by Wim Beeren, then chief curator at Amsterdam’s Stedelijk Museum. The exhibits abandoned their pedestals, some even left the city and the country. Prominent conceptual artists such as Claes Oldenburg, Wim T. Schippers, Robert Smithson and Nam June Paik turned the exhibition into a milestone for avant-garde art. SONSBEEK became synonymous with progressive and experimental, thematic art shows.

In their programmes, successive curators responded to previous editions, spotlighting contemporary issues and examining the state of society. Over the years, the presentation has spread from meadow to mall, from church to red light district, from boats and buses to a procession of hundreds of Arnhem residents through the centre of town. Yet however far the boundaries move, Park Sonsbeek is still at the heart of the exhibition.