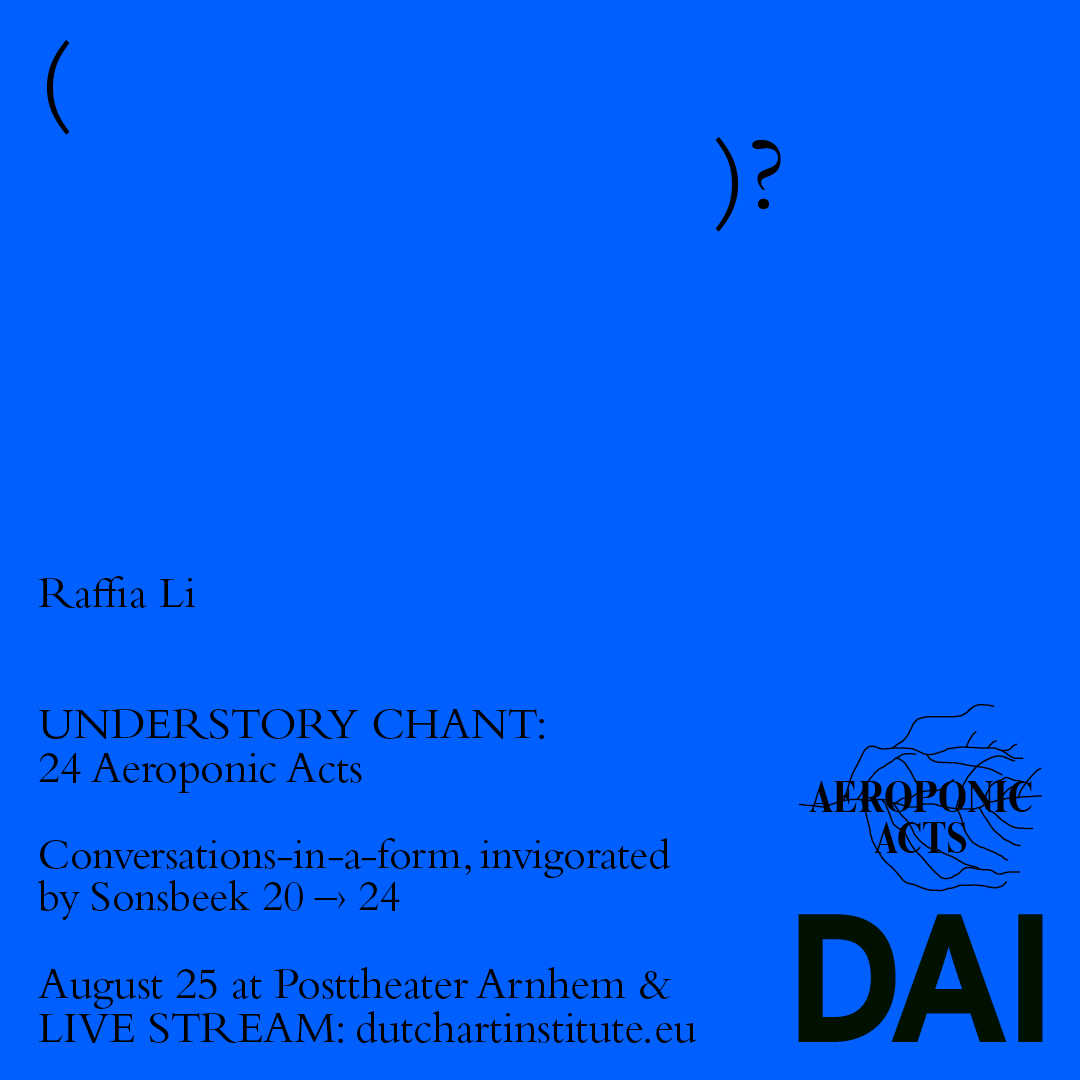 Here you will find the documentation of Raffia Li's presentation as filmed by Baha Görkem Yalım, followed  by a written report, authored by Harun Morrison, which includes a summary of the spoken comments by esteemed guest respondents Barby Asante, Lisette Lagnado and Momtaza Mehri.

Harun's report: The performance begins with a subversion of a question in which syllables are overstressed. The fragility of language is emphasised. Lou Lou, Marie & Miyoung  – are seemingly engaging in learning, understanding and repeating words that are not clear to them. We are witness to an informal language lesson through pointing gestures. Raffia disrupts the proscenium framework descending on a ladder. Three remain on stage. A disembodied voice asks ‘Is that a ladder?’ Raffia explains it’s her first piece of furniture, found on moving to the Netherlands. She walks while supporting the ladder, a structure that typically supports you, then it becomes a crutch. There is a discussion about being able to play Rock, Paper, Scissors, although it’s introduced by a different name: Shitou石头Jianzi剪子Bu布

It’s later understood that the video is part of an exchange of messages between Raffia and Yanfei, her friend in China. (Miguel mentions Raffia's previous Kitchen presentation in PAF, St.Erme, in which the same video was taped and played on her chest.)

Raffia demonstrates the sign for butterfly in Indian sign language, ponders on her time staying in the Dream (a residency in Arnhem) with Raul, JT, Assem, Loulou, Marilu, Dande, Gabi who were there in the past two years, and the difficulty of finding housing in the Netherlands. The performers sit around the pot (borrowed from the Dream), clapping for the dumplings, finally to be served to the audience.

Lisette Lagnado: Quotes lyrics from the Yusuf Islam (fka Cat Stevens) 1970 song, ‘Where do the children play’: “Well I think it's fine, building jumbo planes. / Or taking a ride on a cosmic train. / Switch on summer from a slot machine. / yes, Get what you want to if you want, 'cause you can get anything. / I know we've come a long way, We're changing day to day, But tell me, where do the children play?”. Lissette found in Raffia’s work a prompt to consider the spatial inequalities of where children can play across different locations and geographies.

Barby Asante: on finding rhythm, on finding rhythm with each other, how do we find rhythm with each other? How does language connect us with each other, and how is this rhythm disrupted by the virus? a playfulness emerges, a melancholy, through food, through song, through which we may or may not have belonginging, I’m struck by the vignettes, the disruption of theatre space, which becomes a microcosm of the disruption of the study program, finding a place to be in the Netherlands, how you relate to you classmates, ways to find commonality and how to cross borders, how to bridge corners, how to care in this time, how to care for each other in this time

Momtaza Mehri:  Every translation is a leap of faith. A foot caught by the stairs. A miasma of smoke, ungraspable, trickling between the flight of fingers. Which games betray traditions? Which traditions function like games? Like endless, unwinnable video games, one unceasing level after another. By the fireplace, within the semi-autonomous wilderness of playgrounds, games are invented, are inherited. Ladders are pulled up. Divisions are erected, those unscalable walls of difference  we will spend the rest of our lives recovering from.

Is Enya a philosopher of the ecstatic? Or music to be luxuriously bored by? It matters what you listen to while waiting in the elevator. If the poets are right, if the first act of translation was a mother interpreting the hungry cries of a baby, then what was the first act of mistranslation?

A dream loosely remembered, or the barrel of a gun?

Even the language of hands is expansive. There are no universals, though the closest we may get, is the utterance, the slowly mouthed syllable, the flailing hand extended. Water approximates. Fluid in its states.