Clara Winter and Miguel Ferráez: no cops, no jails, no linear fucking time 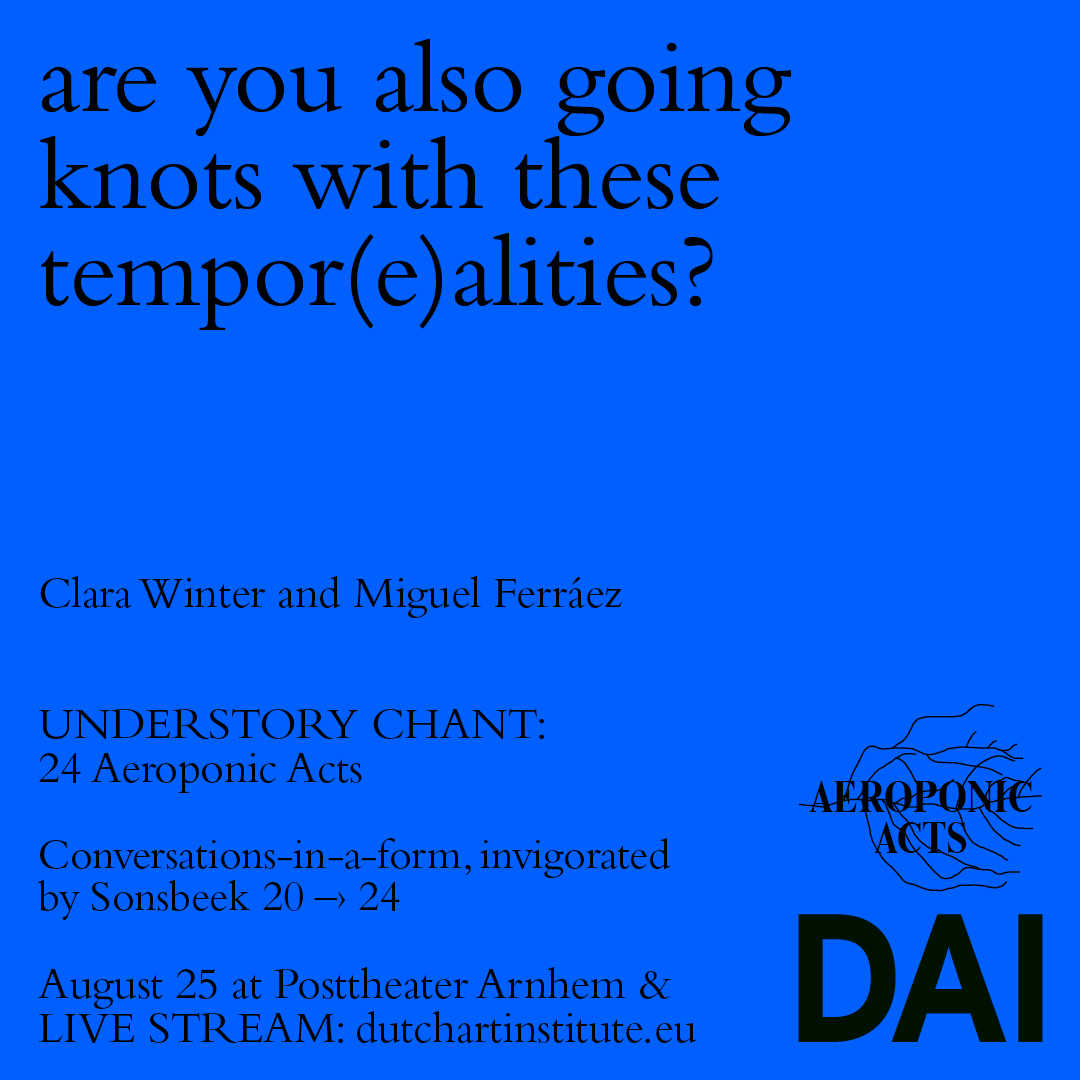 Here you will find the documentation of Clara Winter and Miguel Ferráez's presentation as filmed by Baha Görkem Yalım. The written report is by Harun Morisson and it includes a summary of the comments by esteemed guest respondents.

no cops, no jails, no linear fucking time

Clara and Miguel's question: Are you also going nuts with these temporal realities?

Clara and Miguel's introduction: the (con)temporary condition is a net woven with temporising gestures. Instant photography (whether a single-shot or 240 per second) from portable digital devices is compressing the symbolic order of time (past, present and future) into a single dense time-window: the extended present.

Harun's report: A vibe is set by a soundscape evocative of the Blade Runner score by Vangelis. The sci-fi-esque synth builds tension undermined by Miguel’s direct address. Video footage emphasises the different temporal realities, including a bird’s eye view of feet and hands, the recurrence of characters in a road-side bar (two personae first encountered in a live presentation in Tunis performed by Clara and Miguel). We are invited into a ritual that oscillates between different levels of sincerity. This is affirmed by the New-Romantics-style make-up donned by the artists. Four parallel streams depict backstage areas. We see the underside of the seating rake, the structure supporting our collective weight as we watch. . . a set of live relays from mobile phones, the four relayers somnambulantly move from out-of-sight to on stage. As a curtain is pulled back, more of this backstage is revealed. Later we are enjoined to switch on our phone torchs, creating a field of moving lights. This wouldn’t be out of place closing a stadium set, the same gesture among a small group of friends and students becomes both tender and full of irony.

Momtaza Mehri: I was thinking about the title of the presentation and had that ringing through my head. The contemporary condition is a net woven with temporising gestures. The contemporary gesture might be the hand outstretched with a phone, trying to capture something. It felt like circles and circles of people filming. It has the logic of policing. . . control being waged through the camera. Following but not quite seeing who you’re following [...] So much is lost when films are uploaded. I appreciated there didn’t seem to be a direction that unified everyone's movements. I wanted to see more of the connections with prison or the notion of the carceral. Lack of time. . . enforced time. . . running out of time.

Barby Asante: I was in it [as a participant operating a camera] . . . in the performance, so I'm riffing on it, but there were moments of pleasure - the use of barriers, pulling me back and forth, performative gestures of closure and capture. The instruction suggested ways of being in the space that was disruptive to the whole space. Do I really want to be here? Do I connect to this? Did I not? Being in it I can see more of the relations between the carceral. Carcerality in everyday life. How do we explore that?

Lisette Lagnado: I can only speak from personal testimony. Because I was involved and concerned about whether I was executing the instructions of the videos correctly. Afterwards I could grasp the general situation of what you were proposing. I was thinking if Lewis Caroll had the possibility of doing Alice and Wonderland with your materials it would be wonderful. There are many poetic potentialities, to engage my body fully, even while dizzy. It’s a route but an open one.

Clara Winter and Miguel Ferráez's "no cops, no jails, no linear fucking time" was presented before live audience at the Posttheater in Arnhem on August 26th.