2009 - 2011 Bárbara Wagner ~ “Wherever I go I try to understand a critical situation, especially the social and political [aspects] where I can investigate some issues and understand how it can become an image.” 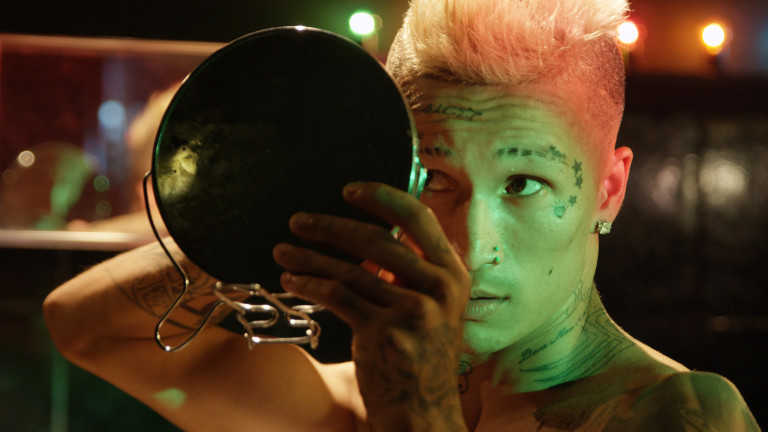 Bárbara Wagner asks “how tradition needs to adjust itself in order to survive along with a dynamic urban culture,” especially in developing economies. Her photographic work borrows from but does not depend on her background in photo?journalism. Using a variety of narrative forms such as video essays, photo research and interviews, her work delves into the tension between tradition and progress, specifically within the traditional culture of Northeast Brazil. She rejects a conventional photojournalistic approach through a number of strategies, and invites new subjectivities and questions about socioeconomic conditions and gender. She does this by proposing scenarios and narrative based visual positions, and investigating popular culture and in particular its representation of the body to subvert and expose hidden political, economic and gender narratives.

Such an approach is apparent in MESTRES DE CERIMÔNIAS, a series of 20 photographs from 2015 in which Bárbara Wagner documents the making of video clips by well-know producers in São Paulo. These videos are produced by well-known producers and are produced for the newly-emerging São Paulo's MC's. In this piece Bárbara Wagner documented the making of music videos of the newly-emerging MC's in São Paulo by well-known video producers. Observing the carefully orchestrated gestures of ​the participants​, Bárbara Wagner exposes the consumerist undertones of this social-media driven popular culture phenomenon. The fragile appropriation of upper-class power and status symbols by the video producers is underlined by making the observers and staff part of the visual composition.

Wagner’s individual artistic practice “focuses on the representation of a ‘popular’ body and its aesthetic and economic relations with forms of ritual and spectacle.” This interest in the ‘popular’ becomes especially apparent in her recent video installation, Estas Vendo Coisas/ You Are Seeing Things (2015) made in collaboration with Benjamin de Búrca. Looking at the professionals within the ‘Brega’ industry (a mass-oriented popular music style which is nearly synonymous with ‘bad taste’), Wagner and de Búrca “investigate how the Popular becomes Pop,” and reveal how, “forms of pop culture crystallize as folklore.”

Since 2011, Wagner has worked in collaboration with Benjamin de Búrca, operating between documentary and art. Together they make use of documentary narrative structures “in order to observe diverse relations between tradition and progress as experienced in emerging economies.” In their work, “they collect accepted forms of visual cultural production and bring to an equal level of presentation diverse and contradictory elements of reality in order to destabilise embedded hierarchies, evincing questions of taste, tradition, race, class, belonging and status not immediately visible.”

Looking at how aesthetic judgments take hold and how they differ, Wagner and de Búrca have focused their attention on such diverse communities such as the younger generations living on Réunion Island, a French overseas department in the Indian Ocean, (in the video installation Cinéma Casino, 2013); security workers at the entrance of private condominiums in Recife, Brazil (photo portrait series Porters, 2013); residents of the gateway neighborhood of Cidade Tiradentes (photo portrait series exhibited in bus stops Como Se Fosse Verdade/ If It Were True, 2015); professional dancers who perform the typical dance form ‘Frevo’ during carnival in Pernambuco (video installation, Faz Que Vai/ Set To Go, 2015); and professionals in the new ‘Brega’ music industry (video installation Estas Vendo Coisas/ You Are Seeing Things,2015).

In 2007 her photographic work was published in the book, Brasília Teimosa/ Stubborn Brasil, followed by another book in 2009, O Que Bonito E Pra Se Ver/ That which is beautiful must be seen(Het Domein, 2009). Both monographs featured an extensive selection of her photographs [any others books?].Wagner’s work is part of the permanent collections of MASP and MAM in São Paulo.

Together with de Búrca, Wagner participated in the 33rd Panorama de Arte Brasileira at the Museum of Modern Art in São Paulo; 4th Biennial of Contemporary Art of the Indian Ocean; 36th EVA Biennial of Ireland; 6th Festival of Contemporary Art in Latvia; the program of exhibitions at Centro Cultural São Paulo 2014 and the 5th edition of the Marcantonio Vilaça Prize. In 2015, Wagner was awarded the ZUM / IMS photography prize, and showed work in the 2016 São Paulo Biennial. (Text: Marianna Maruyama, 2017)

DAI-publication: Once Upon A Time In The West