First through hearsay, then through doing: what started as a fun idea, pitched during lunches in the second DAI Week in Arnhem, grew out to be a big runway event in the chapel of PAF. I cannot remember precisely how it came into existence, but I’ve played with the idea of organising a runway for some time: its short ecstasy, the audience’s applause and cheers, behind-the-scenes moments; but simultaneously the ineptitude of seasonal fashion production, and its capacities of queering an environment (that is, where deemed necessary). Considering the isolated location, the dark Winter days and the end of the Gregorian calendar year nearing, I thought PAF would be a great week for this runway to happen.

There were some dress-up categories in our DAI Catwalk, not to be followed strictly, but as a guideline for some of us to hold onto when unfamiliar, insecure or less able to image something when it comes to compiling an outfit. Some were categories I’d made up before to pitch the idea among peers, others came up through these very same conversations. These were the categories as sent out in a group email beforehand:

Out of pure luck, PAF had this gorgeous chapel, which was almost too perfect to become the runway—but apparently luck exists. Together with one peer, I’d compiled a playlist for the evening of the catwalk. Another peer had helped me with salvaging technical equipment and installing it for the night. 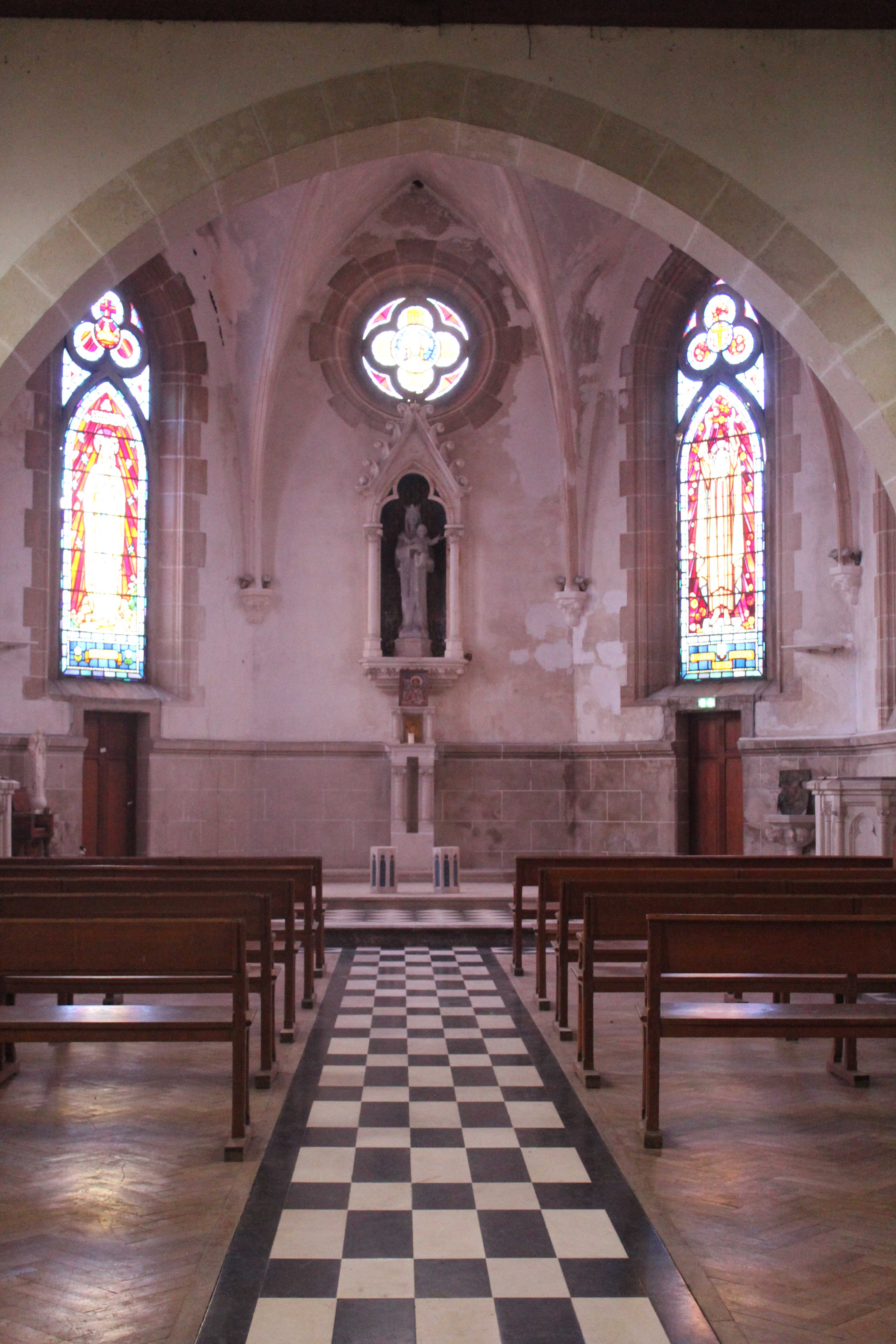 Nine thirty. The reserved seats were slowly being taken up by audience members. PAF Daddy Bar was serving last drinks, and the “models” were getting ready for the walk. Then, “boom”, beats hit the floor and I open the runway in a School Boy Look, fake- calling my mom on the phone to tell her I’ll be home a little bit later—playing outside with the boys. As I walk back the runway, another peer walks up: Curatorial Extravaganza. This one I really liked: as she twists and turns, she takes off her turtle- neck, and reveals another turtle-neck. She struts from the stage, pulls off her turtle- neck, only to reveal another turtle-neck. Almost at the end, a pirouette and underneath the turtle-neck, another one. Then, someone walked up in a duvet, strapped around the waist with a belt. Category: Bedtime Stories. Somewhat later: Sassy Singaporean Lieutenant. Camo, high heels, piggytails, and a barrette, not to mention the poses on the altar area. 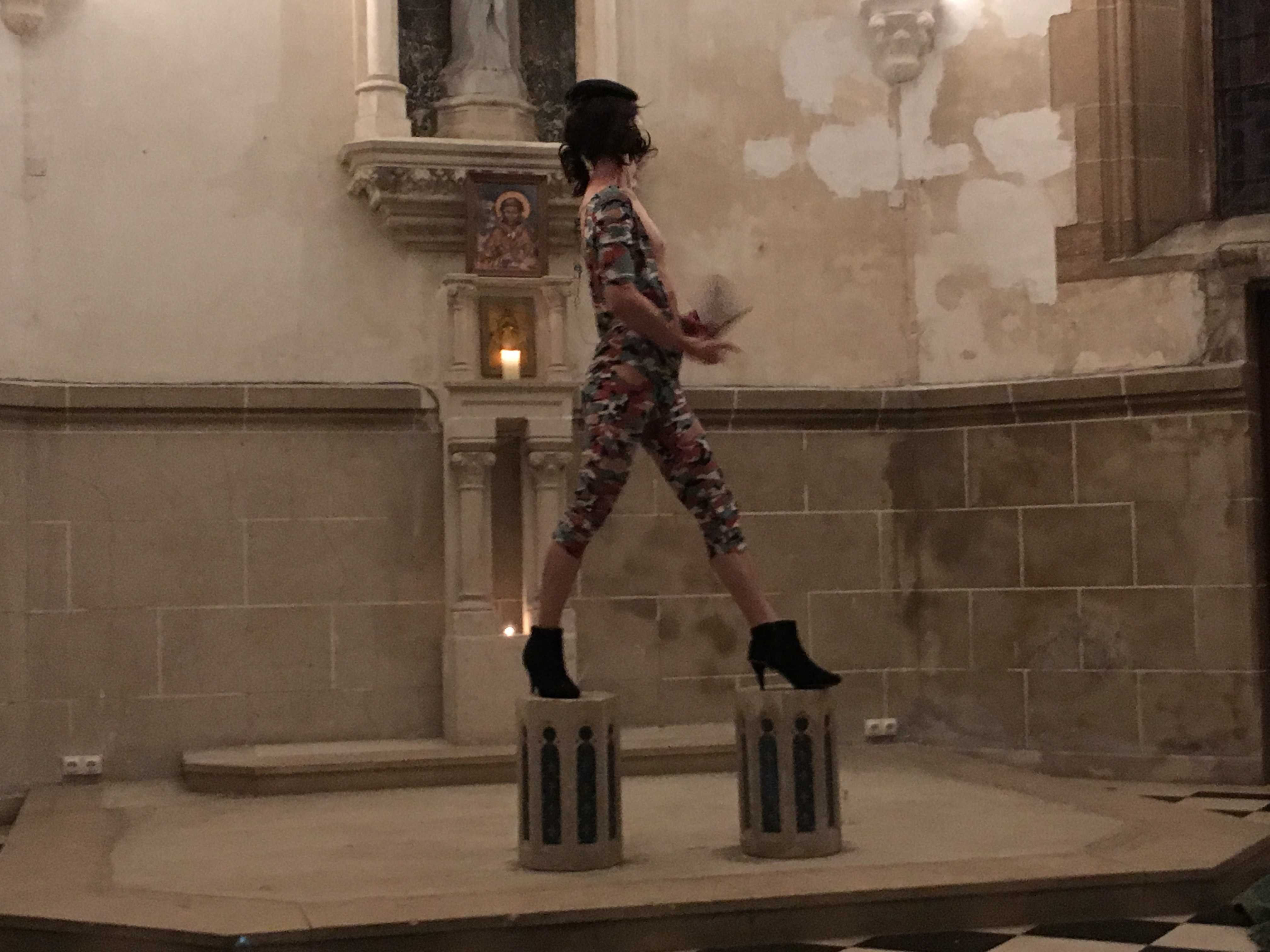 I can go on describing each and every outfit, but I guess the experience can tell for itself, or some of the photos accompanying this description. Everyone looked so beautiful and it was great fun how each had their own twist, act or whatever to make it a bit more than merely a walk down the aisle. Or if so, with a wink to the fashion shows over in Paris or New York in really tszujing the look. 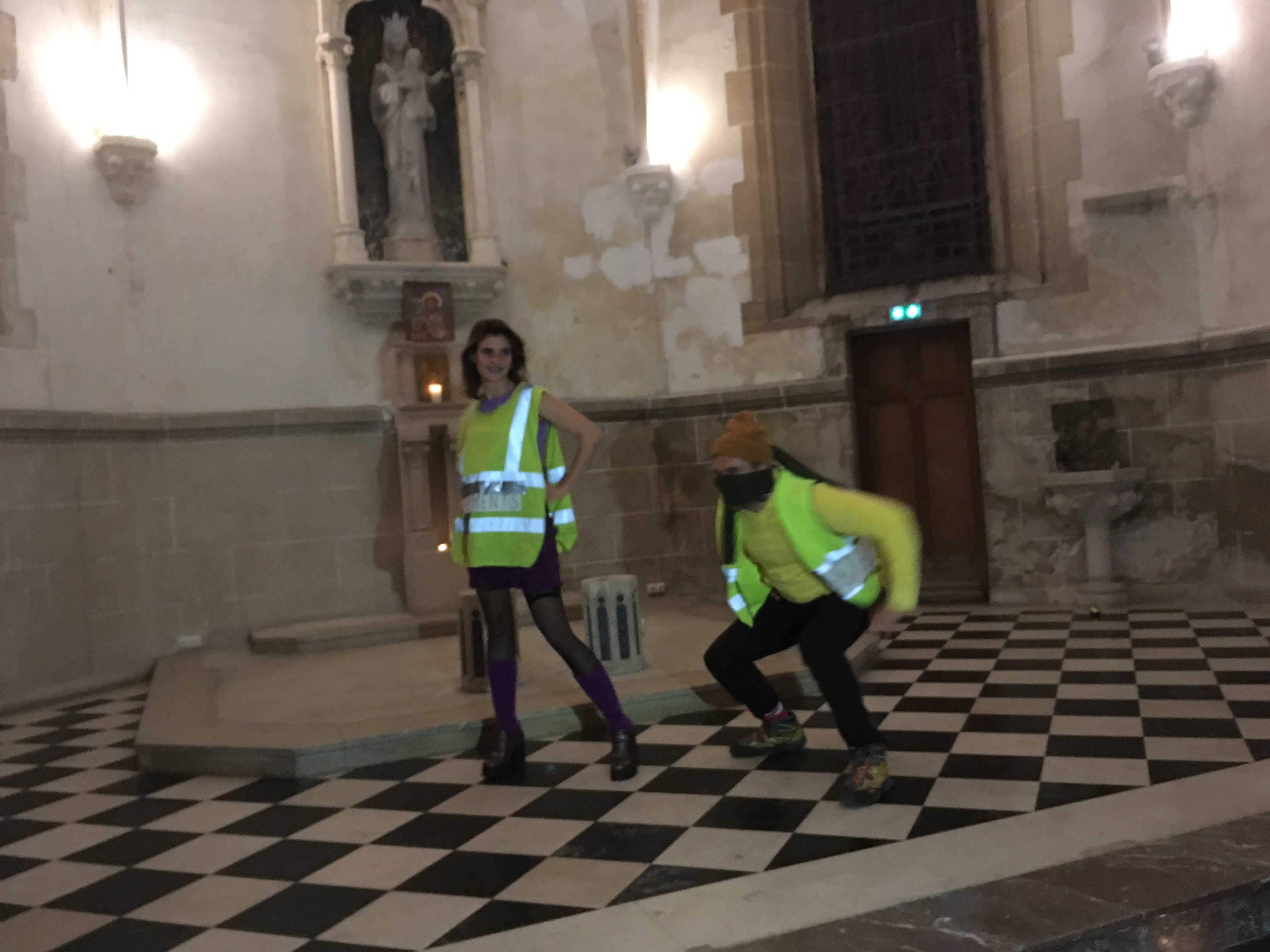 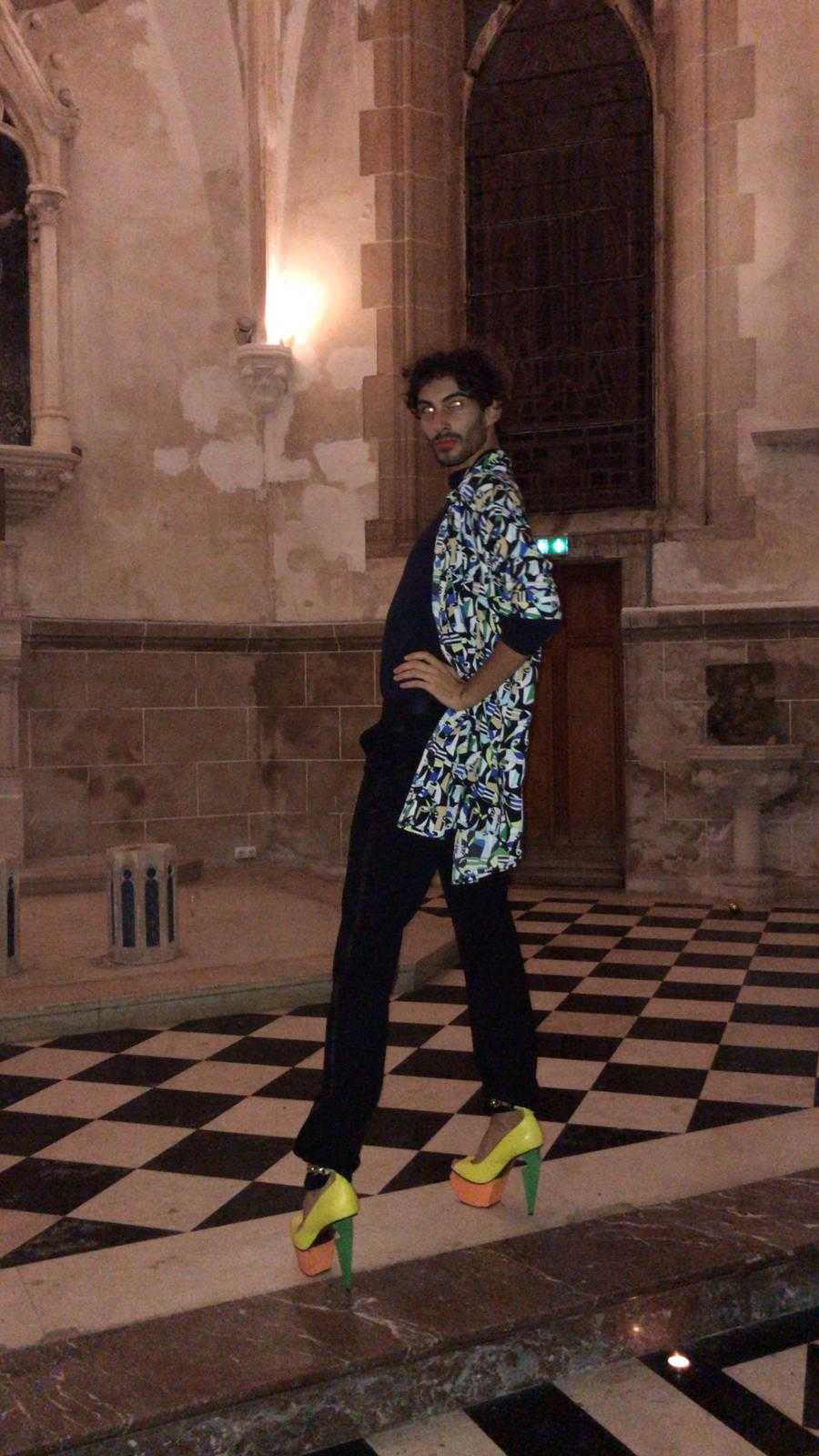 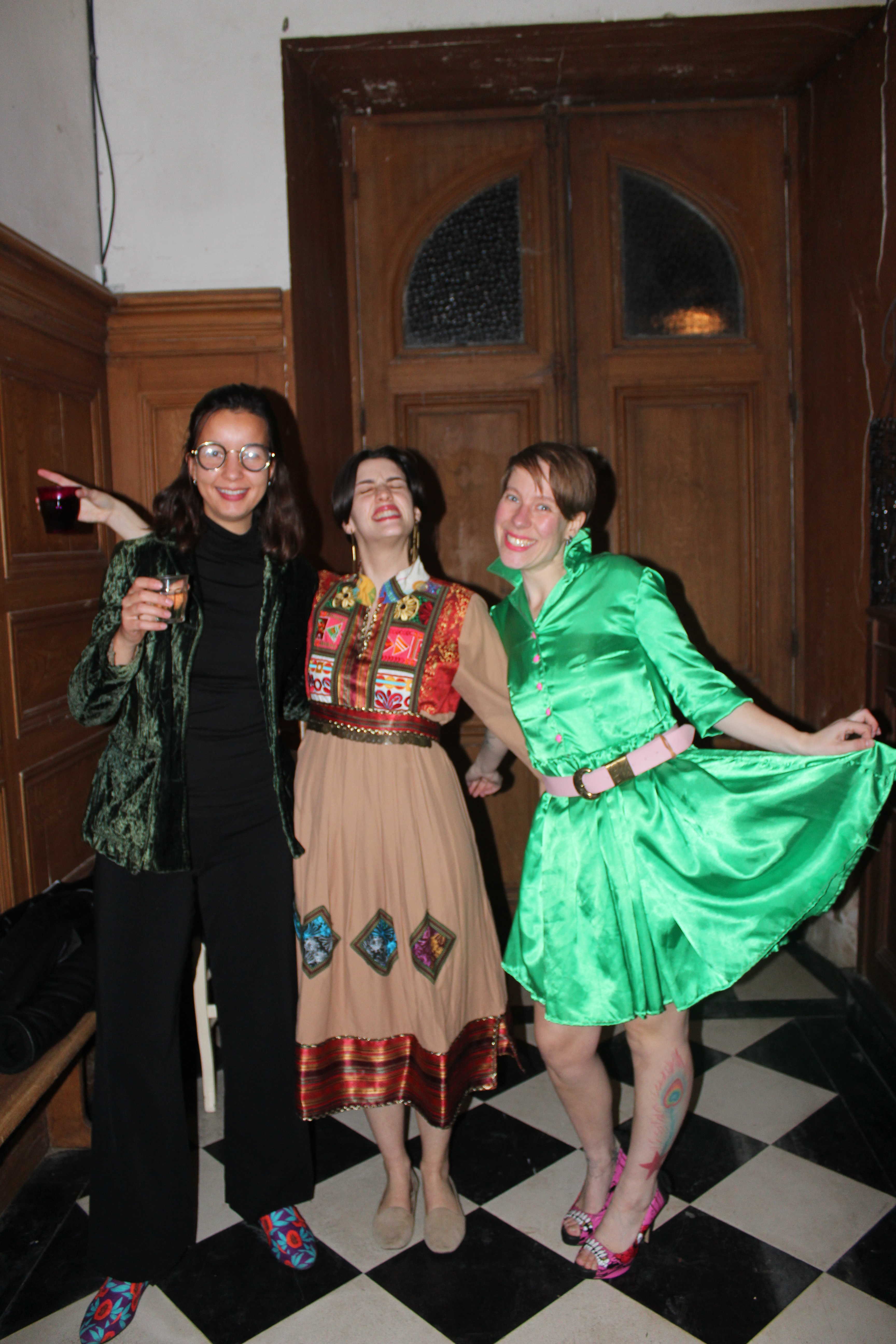 Everything ended when all of us walked our final walk, in closer proximity, and stood on the altar together. And a sense of proudness or happiness overcame me, since I wouldn’t have thought this whole event would turn out so successful.

To myself, as pitching the idea and guiding it to its actual happening, I think of this Catwalk as an initiative of being or living together. And although the walking down the runway itself lasted quite shortly, the initial hearsay, the dressing up, the borrowing of clothes, the requests for accessories, tips or tweaks beforehand, were as much part of the whole experience or process of doing something together. It was not meant in any serious manner, and it wouldn’t make sense theorising it, other than it was to function as an outlet for fun, banter and expression, bringing us all closer. 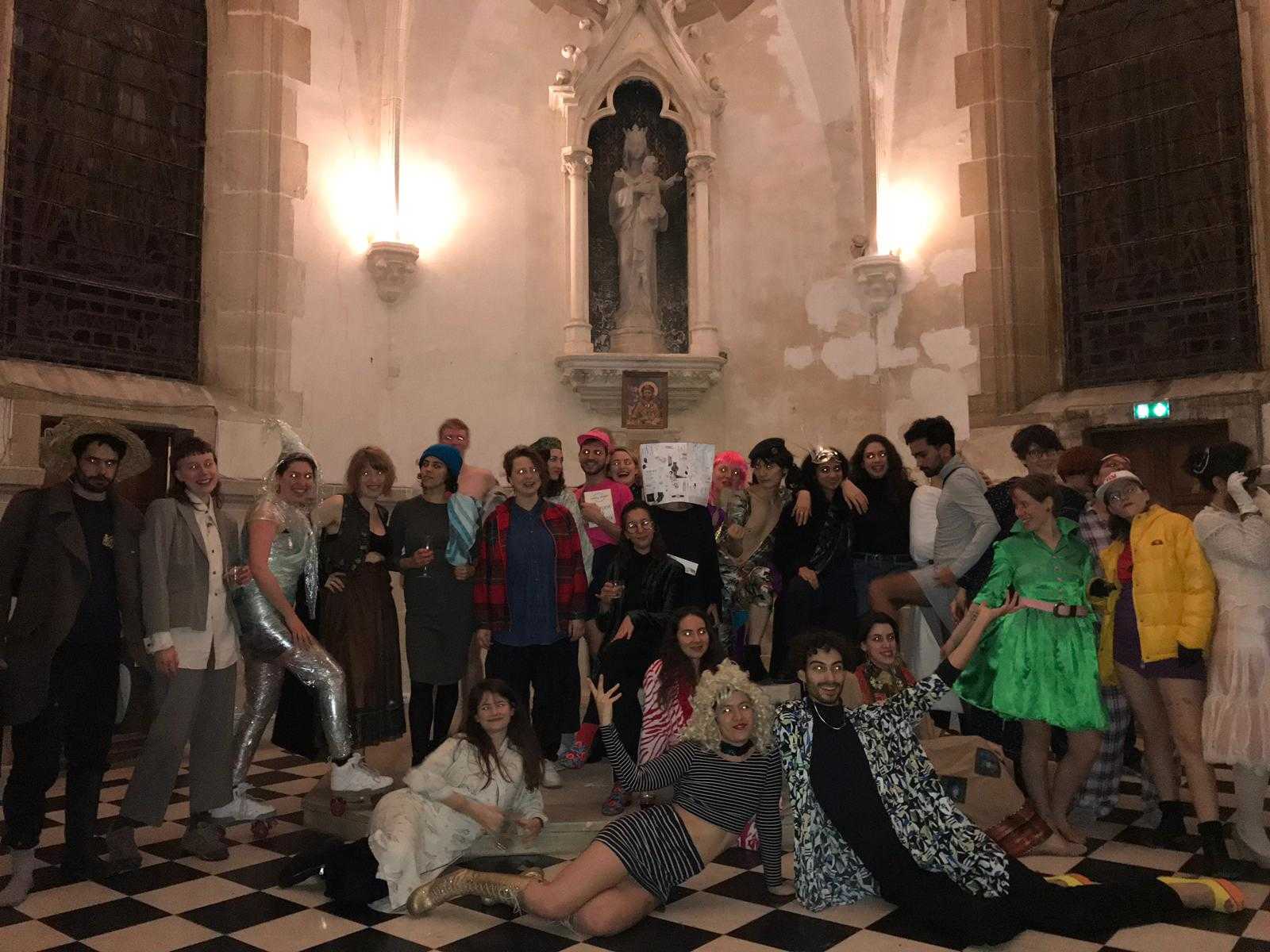