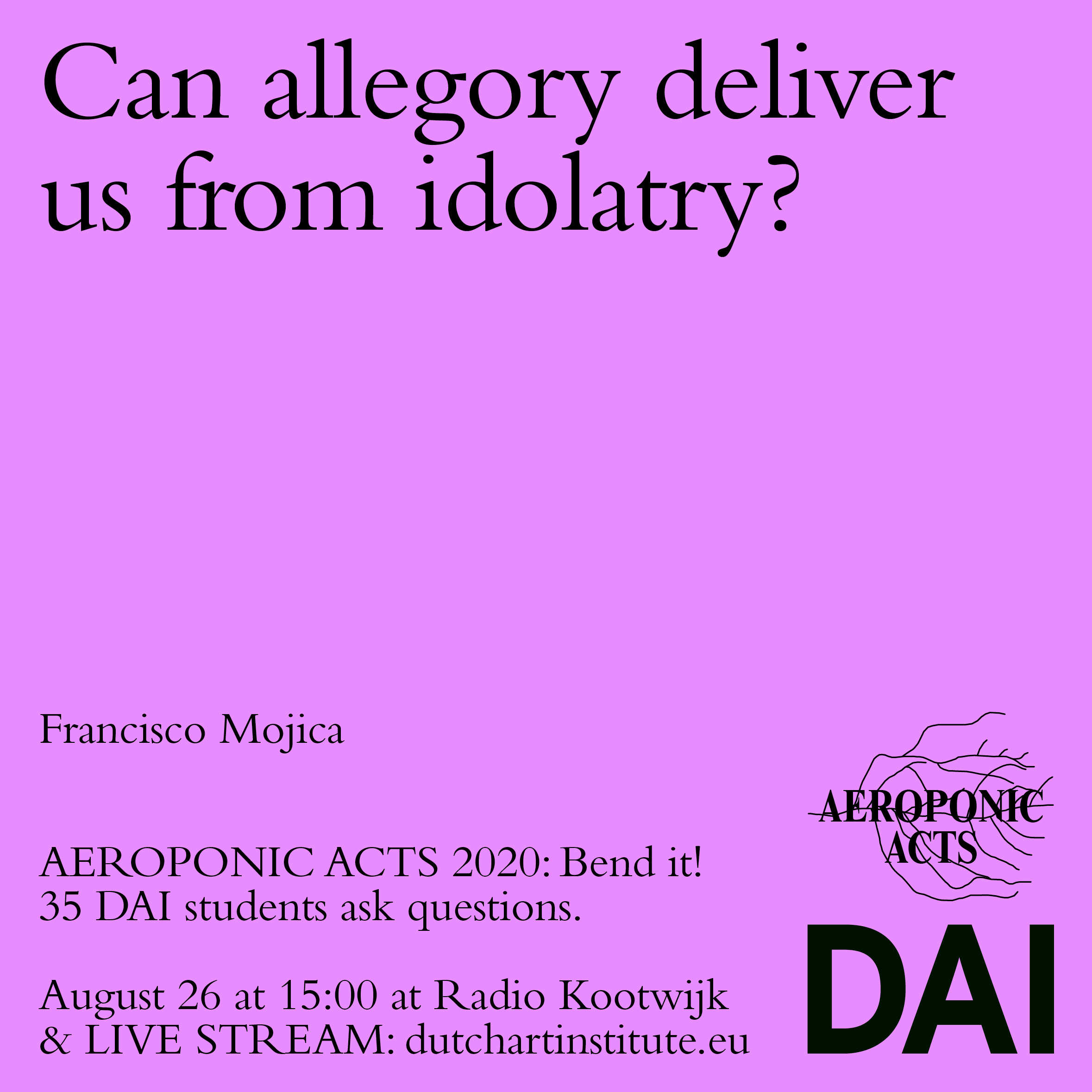 Here you will find the documentation of Francisco Mojica's presentation as filmed by Baha Görkem Yalım. The written report is by Bethany Crawford and it includes a summary of the comments by esteemed guest respondents.

Francisco's question: Can allegory deliver us from idolatry?

Francisco's introduction: A personal ontology on theatricality and agency of sacred buildings. The terror, the image, indeed, the metaphor of metaphor itself, no less stunning than its stunning literalization. Site specific intervention and performative lecture.

Bethany's report: Mojica performatively read a text from a leatherbound book that traces Christian theological mythologies, the establishment of idolatry, transcendentalism and immanence and the staging of the sacred. During the multimedia and meta-allegorical reading, the artist stands in front of a lamp that illuminates the crown of his head like a halo, with a lanyard around his neck. The narration is periodically punctuated with the amplified sounds of a smoke machine as it produces an atmospheric fog akin to the religious use of incense, reverberating in the space like the sound of a choir. The staging cleverly simulates how these forms of idolatry are reproduced, reminiscent of the spotlight of celebrity or corporate conference, highlighting the theatrics for creating atmosphere and meaning.

Amit S. Rai identified Mojica’s struggle with idolatry, which he thinks the artist staged really well. He appreciated how the artist pushed us out of metaphorical practice to think about what it would mean to engage with these intensities of self-organization, the language Rai used in seminars, breaking out of how we immediately approach thought within systems of representation. He was interested to understand further how Luther’s break with Catholicism operated in Mojica’s work.

Flavia Dzodan echoed Rai’s mistrust of metaphors in her mistrust of allegory having grown up in dictatorships where allegory is used to create the illusion of national identity involving ‘the people’. In regard to the artist’s question, ‘Can allegory deliver us from idolatry?’, she said allegory is one of the groundings of idolatry, not only in the religious sense but in the worship of the idol, which in fascist or fascist adjacent regimes is power. When he chanted ‘agnus dei’, a very specific and Catholic reference to god, she thought of god itself as an allegory of immortal delusions and our need for power – how we have transferred this very human need to have powerful figures into the god figure that rules over. As the artist is Colombian, she said that even if he wasn’t catholic, he grew up catholic, and could imagine that he might see a figure like Luther as rebellious figure. Having lived in the Netherlands for twenty-two years now, she now thought the breaking away from was motivated by not having have the power, and thought the artist’s god figure as an allegory of our constant struggle to access sites of power. She insisted that the way out was in the metaphorical, which allows for the lyrical while allegory obscures the possibilities of lyricism, beauty and difference as it is fixed and top down while metaphor is found in the cracks not necessarily visible. That which will deliver us from idolatry, she said, is the collective construction of new metaphors to speak to one another.

Amal Alhaag said it was interesting to sit between the two different positions on allegory and metaphor and proposed the parable or the fable as a way to expand the inward lens the artist offered. As someone in the West but with one foot out, she thought of it as a desire to overpower but at the same time reinforce the same sort of regime and insistence. She appreciated the minimalist staging and sound and when he asked himself questions in a very kind joking way, which could only be picked up if really listening. She mentioned a Moroccan scholar whose work explores ‘naming typography’, where traumatic or joyful experiences unfold at only one site, and speaking together about these. She thought about how she speaks Somali technically very well, but did not grow up in the land, so is not fully equipped to have the naming typology of the land. She mentioned a time sitting with an elder, listening and asking about mythologies, and couldn’t understand half of what they were telling her. She found this interesting to find the naming typology as a tool for the inward lens to see the gaps in the remembering or the storytelling, which the artist brought forward.