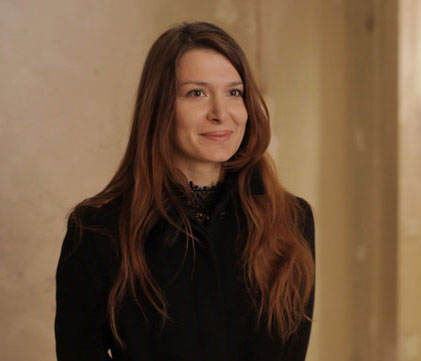 And how Death is that remedy all singers dream of*

We mourn the passing of our incredible friend, the performance artist and former DAI-student & later tutor, Chiara Fumai (Rome, 1978 - Bari, 2017)

We are heartbroken to say farewell to an extraordinary, lucid and passionate artist, whose performative practice she herself described as belonging to the tradition of female psychics, who are 'spoken by' different controversial entities. Entities which Chiara freely (mis)interpreted and combined into new stories, while questioning their symbolic meaning and representation in the mind of the viewer. Fumai's starting point always was performance, later transformed into installations, videos, collages and performative displays. From her 100-days performative contribution "Shut up. Actually Talk"(in which a nineteenth-century Vaudeville actress and human curiosity, welcomes visitors inside a bizarre display dedicated to Modern Dialectical Philosophy and is demonically "spoken by" the radical feminist manifesto “I say I” by Rivolta Femminile, 1977) to "dOCUMENTA (13)" onward, her artistic career skyrocketed. In 2013 Chiara was the winner of the ninth edition of the Furla Art Award and her work was widely exhibited and performed ever since. 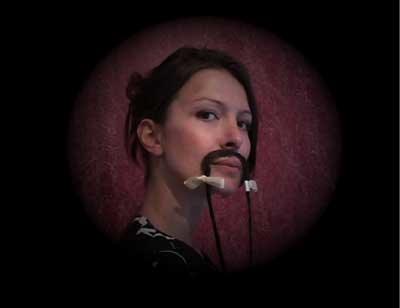 During the summer of 2009 the always "roaming", restless Chiara had (not for the first and not for the last time) decided to permanently (!) base herself in the Netherlands and so it came that she applied for a placement at the DAI. We were stunned to find amazing, early videos such as "I am a junkie" and "The Moustache Woman" ( see video-still above) in the portfolio that she presented to us. As one can imagine we were absolutely thrilled to accept her into our masterprogram, but also slightly concerned about our chances to keep a diva like her on board for two, undoubtedly endless long years at the end of the world (DAI, in those days, was based in the East-Netherland's 'outback'). And we were right: after one year, Carolyn Christov-Bakargiev commissioned Chiara to produce a work for upcoming dOCUMENTA (13) in Kassel in 2012 and ongoing, complexities with landlords both in Italy as well as in the Netherlands, did the rest.

But what a year it had been: 2009 - 2010, with fellow students such as, among others, Kostas Tzimoulis, Doris Denekamp, Gonçalo Sena, Charlotte Rooijackers, Taf Hassam, Lauren Alexander, Jort van der Laan, Anna Hoetjes, Frederik Gruyaert and Lado Darakhvelidze. Coinciding with her time at DAI, Chiara's practice began to land "in the world" and her professional activities were demanding a lot of her time. She nevertheless committed wholeheartedly, and with all her erudition and intelligence, wit and wisdom, to sharing and working with her peers and tutors (most notably, curator Mark Kremer who in those days was leading a DAI-project called GoodTripBadTrip (2008-2010) which brought a small group of tutors and students, including Chiara, to Lake Baikal in the South of Siberia, where, on the 'enchanted' island named Olkhon, they participated in a unique day-long session with the local shaman.

Chiara also took up an active role in the student led initiative Studio Palaver, a concept by co-student Taf Hassam, that aimed to create further communication and dialogue between the practicing artists of the DAI. The intention was "to grant and allow space for the development of a ‘questionable’ Palaver practice. Palaver in essence is wholly organic, and so should only ever be met with Palaver, for it is the belief of Studio Palaver that there is no absolute practice for Palaver." During the December  2009 session Chiara, typically, dressed as Taf Hassam and presented Studio Palaver Fotonovela. At the beginning of the session Dalida (& Alain Delon)’s campy, melancholic song Paroles, paroles was used as 'jingle' and broadcasted via the building's loudspeaker. Listening back to it and suddenly seeing the sad similarities between the iconic popular singer and the radical feminist performance artist does not fail to move the writer of this text.

Few years after Chiara's premature departure from the DAI, we invited her back, this time as a coach to a selected group of students. It was clear that she was with those students who needed to be encouraged to speak up, to take the lead over their practices and to learn to forget about their inner (& outer) censors. Chiara's empowering teaching skills immediately struck. We were also struck by her generosity towards our program. Not only had she actively managed to maintain most of the friendships that originated in the 2009-2010 era, she had also become something like a part-time ambassador for the DAI. And of course she even considered to move back to Amsterdam. Permanently !

Chiara's glowing warmth, the outrageous fun, the striking elegance and the wild exuberance of her kaleidoscopic personality all co-existed with her sadness and spleen. We love you as you are, Chiara and we always will.